I often blog what the Pope says at his General Audience on Wednesdays, but I will never do so without the sense of what it is like to actually be there. Thanks to several people we knew that to get a good seat at the General Audience we needed to be there as soon as they allowed people in, around 8:00 a.m.(two and half hours before the audience begins, although one of our contacts told us that Benedict had been beginning them about a half hour early). So we were there, dressed for warm weather, because it was rather warm at the time. We found the shortest line and waited about ten minutes until the mad rush began. The security was fairly lax at the entrance point that we were at, police with wands, but not really using them. So once through the entrance we ran (sort of the way people were running through the columns when Pope Benedict was about to be announced as the successor of St. Peter last year). 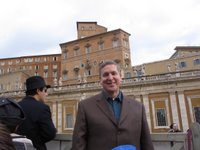 We were able to get to the fourth row right against the center rail, which turned out to be a pretty good spot. The two men sitting in front of me were from Brazil, I think the people behind us were from Ireland. There was a group from Steubenville near us, as well as the St. Thomas folk who were just behind us.

Then it turned cool, the sun disappeared and the clouds covered the sky. The temperature must have dropped ten or fifteen degrees. I think Joseph fell asleep, as well as the baby and for the most part we sat in silence with some outbursts of enthusiastic groups now and then.
Ten o'clock arrived and we were hopeful that the pope might come out early, but not today. Then at ten thirty there was a commotion and suddenly there he was, well looking exactly like the pope! You can see how dark the skies were and the pope had on his winter coat. 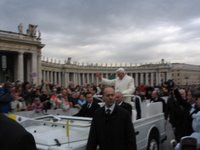 Pope Benedict has shunned the glass case that John Paul used after he was shot in 1981, when I saw Pope John Paul in Miami he was behind the glass of the popemobile when he drove through the streets of Miami,but then I saw him up close at Mass the next day (a Mass that wasn't finished because of a thunderstorm). I remember being shocked at how old Cardinal Ratzinger was when he celebrated the funeral of Pope John Paul, and even how he seemed bent with age as he entered the conclave to elect the new pope--but how youthful he emerged from the conclave!
Organ music is played as a background which gave the feeling of either a carnival or funeral but didn't seem to strike the right chord for the ceremony.
Now right after the Pope passed us the baby's bottle somehow dropped onto the pavement and went rolling down the path the pope had just passed. A Swiss Guard finally picked it up after it had rolled for what seemed like an eternity, and looked at it suspiciously. He finally walked over and handed it to me.
After making the circuit the Holy Father's pope mobile drives up the steps and then he gets out and goes to his chair... 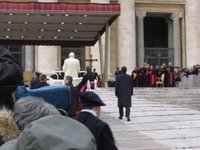 Then you hear something along the lines of:

Which I now know means:

Today, with the Ash Wednesday Liturgy, the Lenten journey of 40 days begins that will lead us to the Easter Tridium, the memorial of the passion, death and Resurrection of the Lord, heart of the mystery of our salvation. It is a favourable time when the Church invites Christians to have a keener awareness of the redeeming work of Christ and to live their Baptism in greater depth.

The audience continues with the pope teaching a lesson in Italian. At the conclusion various Monsignors in different languages greet the pope in the name of the various language groups present. Some groups when they are announced sing, some just cheer. 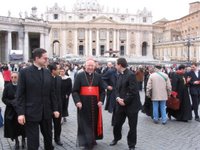 The pope acknowledges them with a wave, then responds with a summary of his teaching in that language. This pope like John Paul before him is fluent in a number of tongues and it is interesting to hear him speak English.

Then he greets the Cardinals and bishops present. At this audience there was one cardinal (I believe it is Cardinal Jorge Arturo Medina Estevez the very Cardinal who announced to the world last year Habemus Papam!) pictured here in the piazza afterwards. Then the sick and handicapped are brought in wheelchairs before him, pushed by nuns for the most part, and he gives each of them a blessing. I'm not sure what the history of this is or for how long this has been done, but I found it to be one of the most poignant moments of the audience. There was a long parade of these crucified memembers of the Body of Christ and they evoked from the Marian prayer "do you do we cry, poor banished children of Eve, in this valley of tears." The wisdom of giving these souls the privileged position at the audience and the primacy of a personal meeting with the pope was incredibly Christian--a great witness. Would that all in attendance learn to see in those marginalized the truly important.
After this the pope walked over to the barrier to the left at which were standing a group of Moslems and he greeted them and spoke to them and then worked down the line. At the end of this line he mounted the popemobile and then passed along the barrier on the right and shook hands as he went along. Then the popemobile made its way down the steps toward me. (Click on any image for a full size shot) 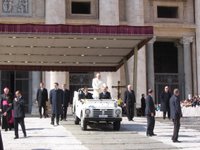 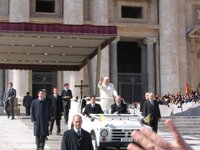 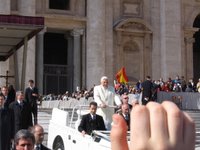 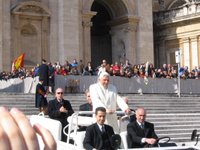 Until finally, there he was right in front of me. 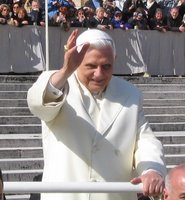 So I put the camera down for a second or two. Then after I gave him a wave, I picked it up again just in time because someone handed him a baby. 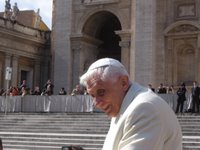 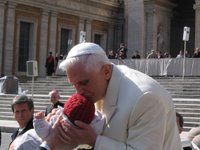 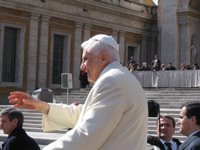 Then he was gone, as Joseph would say "back to the Pope cave (ala batcave)." The thousands that had gathered began to disperse. Amy had more Rome Reports video to shoot, so she went with the kids for the outside shots. I was to meet with Jeffrey Kirby to take a walk up to the North American College for a tour and lunch. While waiting, I spotted another group gathered for the pope's audience, a group of Eastern monks. 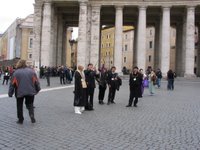