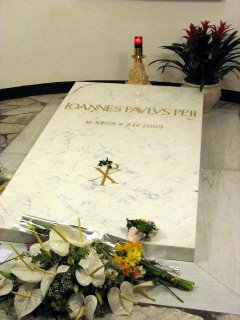 PRAYER FOR ASKING GRACES THROUGH THE INTERCESSION OF THE SERVANT OF GOD
POPE JOHN PAUL II
O Blessed Trinity
We thank You for having graced the Church
with Pope John Paul II
and for allowing the tenderness of your Fatherly care,
the glory of the cross of Christ,
and the splendor of the Holy Spirit,
to shine through him.
Trusting fully in Your infinite mercy
and in the maternal intercession of Mary,
he has given us a living image of Jesus the Good Shepherd,
and has shown us that holiness
is the necessary measure of ordinary Christian life
and is the way of achieving eternal communion with you.
Grant us, by his intercession, and according to Your will,
the graces we implore,
hoping that he will soon be numbered
among your saints.
Amen.