Amy was on CNN last night doing her own protest of sorts:

VARGAS: Author Amy Welborn, who's book De-Coding Da Vinci: The Facts Behind the Fiction of The Da Vinci Code

AMY WELBORN, AUTHOR, "DE-CODING DA VINCI": The major concern was, you know, what can they do not to make everybody really made and not inspire a boycott of this film or the studio or anything like that. And it's really a very delicate situation. They don't want to alienate the core audience. 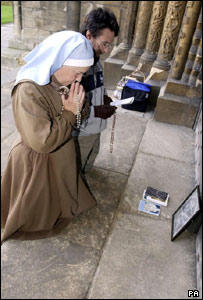 "Sister Mary Michael, 61, knelt in prayer outside the building where scenes for
the blockbuster starring Tom Hanks are being shot.

She believes the book
by author Dan Brown contains heresy.

Asked if she thought the people
making the film would care about her protest, she said: "I don't suppose they
do, but that doesn't matter tuppence to me. It matters to me what God thinks,
not what the film crew think.

Sister Mary, a former Discalced Carmelite who now belongs to
Our Lady's Community of Peace and Mercy in Lincoln, said a storyline that Jesus
married Mary Magdalene and that she bore him a child was based on a gnostic
heresy that she first became aware of 50 years ago.

"It is an old error,
derived from the mystery faiths of the east. It is not a new story," she said. "